Why does a heavier solid float on water?

Why does a heavier solid i.e. a plastic float on water?

If you feel that the weight of the body must be greater than an equal volume of water, and it does not sink, there must be a reason. This is what happens in the case of a ship. The ship is made up of steel. If you put a steel ball or a nail, it sinks. But when the steel is flattened and then shaped in to a boat, it floats. Why?

Because here the average density, which includes the cavity of the boat,  becomes less than the weight of water displaced. You can easily see that the ship will sink if water is allowed to enter into the cavity.

You can experiment with a steel bowl too. The bowl will float on water, it water is not allowed to enter the cavity.

So, it’s not just the density of the material, it is the average density that counts.

If the object is made in the shape of a bowl or a ship, water is not allowed to enter inside, and the weight of the ship is maintained less than the weight of water displaced by it.

What is hysteresis? I only know its related to the frequency.

Hysteresis phenomena occur in magnetic materials, (as well as in the elastic, electric, and magnetic behavior of materials,) in which a lag occurs between the application and the removal of a field (or force) and its subsequent effect 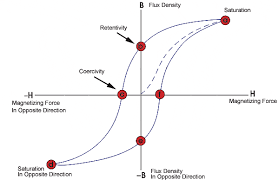 When an external magnetic field is applied to a ferromagnetic substance, the atomic dipoles align themselves with the external field. Even when the external field is removed, part of the alignment will be retained: the material has become magnetized.

If the magnetic field is now reduced linearly, the plotted relationship will follow a different curve back towards zero field strength at which point it will be offset from the original curve by an amount called the remanent flux density or remanence (RETENTIVITY).

If this relationship is plotted for all strengths of applied magnetic field the result is a sort of S- shaped loop. (See the diagram) The ‘thickness’ of the middle bit of the S describes the amount of hysteresis, related to the coercivity of the material.

1. Ramesh buys 6 bottles of syrup each containing 1litre. Each empty bottle weighs 400g. The density of syrup is 1.2 g/cm3. What weight does Ramesh have to carry home?

2. The volume of 900g of a substance is 1000 cm3. Will the substance sink or float in water if the density of water is 1g/cm3. What will be the mass of water displaced by the substance?

introduced by Einstein  (1917) into the equations of general relativity to allow a steady state cosmological solution to the Einstein field equations. The constant was introduced before the concept of the Big Bang had been conceived, so an expanding or contracting universe  was regarded as physically implausible, leading Einstein to add

as a "fudge factor." In theory, the constant can be derived from quantum field theory, but the derivation has not yet been performed. Einstein’s cosmological constant is equivalent to a vacuum energy density, which means it can be put on the left hand side of Einstein’s equations with the geometry (as Einstein did), or on the right hand side with the stress-energy, both forms being mathematically equivalent.

in our present universe is not known, and may be zero, although there is some evidence for a nonzero value; a precise determination of this number will be one of the primary goals of observational cosmology in the near future.

The value of the cosmological constant is an empirical issue which will ultimately be settled by observation; meanwhile, physicists would like to develop an understanding of why the energy density of the vacuum has this value, whether it is zero or not. There are many effects which contribute to the total vacuum energy,
including the potential energy of scalar fields and the energy in “vacuum fluctuations” as predicted by quantum mechanics, as well as any fundamental cosmological constant.

If the recent observational suggestions of a nonzero

are confirmed, we will be faced with the additional task of inventing a theory which sets the vacuum energy to a very small value without setting it precisely to zero. In this case we may distinguish between a “true” vacuum which would be the state of lowest possible energy which simply happens to be nonzero, and a “false” vacuum, which would be a metastable state different from the actual state of lowest energy (which might well have

= 0). Such a state could eventually decay into the true vacuum, although its lifetime could be much larger than the current age of the universe. A
final possibility is that the vacuum energy is changing with time — a dynamical cosmological “constant”. This alternative, which is sometimes called “quintessence”, would also be compatible with a true vacuum energy which was ultimately zero, although it appears to require a certain amount of fine-tuning to make it work.
No matter which of these possibilities, if any, is true, the ramifications of an accelerating universe for fundamental physics would be truly profound.

What is buoyant force? I’m unable to understand practically from book. please give vast and practical explanation.. (Raj asked)

When an object is immersed, it displaces the fluid already present there. The upward force (buoyant force) is the result of the fluid’s attempt to reoccupy the space.

If the object placed in a fluid is denser than the fluid, it will sink. Though it experiences an upthrust, its weight will be more than the upthrust.

The upthrust is equal to the weight of liquid displaced by the immersed part of the body.

If the object is of less density than the fluid, it will come up and float.

For a floating body, the net weight is equal to zero, as the upthrust balances the actual weight of the body.

How the value of acceleration due to gravity will change if the radius of earth is doubled keeping its density constant?

How the value of acceleration due to gravity will change if the radius of earth is doubled keeping its density constant?

Why some substances are transparent while some others are opaque

Why some substance being solid enable light to pass through them (like glass, diamond (the hardest substance etc) but other who have less density do not permit refraction?